Aside from our little ER adventure, we had a fabulous weekend!

Uncle Nick and Aunt Beth came into town! Friday night, we all went to Issa's fifth grade versus teachers basketball game. I have to admit, I don't think any adult went into this super excited, but we wanted to support our girl. However, it ended up being a ridiculously fun night. I was reminded again what a great school we have as the teachers truly played with the kids. It's hard to put it into words, but I'm so glad Issa will have those memories.

Saturday, I worked in the morning while the kids went to Nana's to play with Uncle Nick and Aunt Beth. When I got home, Brad and I joined everyone for lunch and then bowling. We all laughed until we cried. Brad and I are terrible bowlers, but oh we had fun. We spent the rest of the day just playing and eating and enjoying the time. Beth and Issa did nails. I got to talk with Nick. We just were. My favorite.

We are already planning a road trip to Georgia so we can repeat the fun!
Posted by Heather at 9:51 AM No comments:

Email ThisBlogThis!Share to TwitterShare to FacebookShare to Pinterest
Labels: Family

Well we met our first goal of kindergarten before ER but didn't make the out of elementary school second marker with this one: 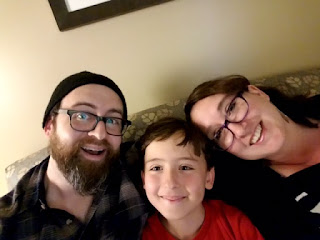 Clearly, the requested ER selfie demonstrates he is fine, but he did scare the bejeezus out of us yesterday!

Yesterday afternoon, Brad was cleaning an infected cut on his finger, and Evan just dropped. We truly though he had a ten second seizure. He came to, stood up, and had another spell for about two seconds. He was lucid and could remember everything--including how to count to 20 in Japanese--but we were in ER within ten minutes of the incident. Mom thankfully came to stay with Issa.

Brad carried Evan into ER and I parked the car. I came running in and totally skipped the whole metal detector thing. Security got between me and Evan, but finally decided it was easier for everyone to let me go on my word of not having any weapons. The nursing staff was amazing and followed us around with paperwork instead of making me stand at the counter to fill it all out. They gave us a private waiting room with low lights just in case. They kept checking on us. Brad knew all of the medical terms for what we saw. He was so calm and so solid. I fought tears the whole time.

Within ten minutes of our arrival, Evan was fine. All of his color was back and he was cracking jokes, ready to head out. Of course, that meant our wait time grew. By the time we saw the doc, Evan was totally fine. They ran some tests and then started asking questions. Did you see a bright light? Did you hear a buzz? Yep. He passed out.

As it turns out, he has vasovagal syncope. It's a heightened flight or fight defense. Essentially, he was so worried his finger was going to hurt he subconsciously held his breath, and his body reset. He passed out, and his extremities shook to restore oxygen. He yawned repeatedly when he came to because his body was looking for more air.

We might never see it again, but at least we know the specter of  pain is the trigger. I know exactly how he feels--I have the same response to blood. This morning, we took care of his finger and kept him chatting the whole time--you have to breathe to talk. We were giving him a hard time about having such a low bar for him: just breathe. He was all good.

He now has notes with the school nurse and PE teacher--just in case. And I am still saying all kinds of prayers of gratitude for the medical staff and such a simple diagnosis. And the fact that I can breathe again...

Email ThisBlogThis!Share to TwitterShare to FacebookShare to Pinterest
Labels: Evan

A Piece of My Heart

Last week, someone asked me what the hardest part of my job was. At the time I answered that it's 24/7. Then I lived this week and I remembered the real answer...

We are closing in on the end of the semester. Wednesday night, we had our senior banquet. Last night, I judged STUNT, our version of field day that ends with a lip sync competition among the classes. The seniors ended with "Lean on Me" and tears in their eyes.

And then I remembered the hardest part...May.

Every May, about 30 little pieces of my heart walk off of this campus. This year, it especially true. This graduating class is the first that I have seen all the way through the program. In some ways, we built what we have together. They helped me design the Italy program. I have gotten to see them truly become teachers before my eyes. We have laughed and cried and I have nearly killed them at times.

In a few weeks, they will walk across that stage and out into their own classrooms and the world beyond these walls, and I will miss them stopping by my office. I will miss running into them on campus. I will miss them. And that's the hardest part.
Posted by Heather at 9:53 AM No comments:

Email ThisBlogThis!Share to TwitterShare to FacebookShare to Pinterest
Labels: Work

This week is nuts. I'm spending two full days in schools leading PD, hosting our senior banquet, judging STUNT, and cheering on my students at the graduate research conference on top of the usual meeting and teaching load--and that's just my work life.

Issa is also having a very big week. Friday, she is playing in the teacher versus fifth grade basketball game, and last night she had the UNC baseball game where she got to meet her pen pal. Daddy got to take her to the game since I had to teach: 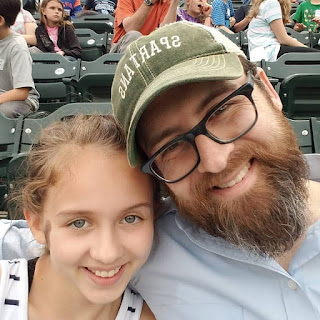 Issa had a blast! She loves her pen pal, and she was so excited to catch a game ball and get it signed. Even Daddy had a good time and grudgingly cheered for the Heels!
Posted by Heather at 9:11 AM No comments:

We thoroughly enjoyed our Easter celebrations this year. After several years of egg-coloring and Easter meals at our house, I had assumed we would continue the tradition. Wrongo! The kids announced we clearly had to do these things at Nana's. So...we began Friday with the egg coloring: 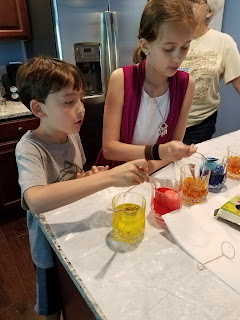 Evan was so much more careful and actually had an Easter with flesh-colored hands: 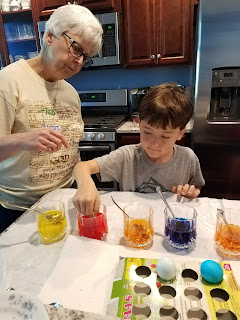 This year, we also decided the kids were old enough to revive Grandma Luzny's tradition of hot gluing all manner of things to an egg: 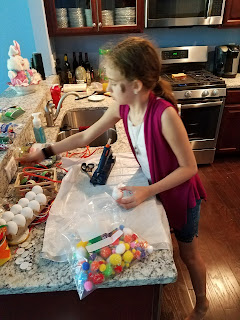 Issa was most proud of her minion egg: 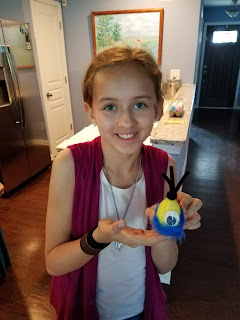 The kids spent the night there while Brad and I had a lovely date night. We ate barbecue and watched a very sad movie that I had no idea was going to be sad until it was--and then Brad pointed out the six millions clues and I was even more sad.

Saturday, the boys headed to the dojo while the girls went shopping, and we all met up in time to go to the farm for an egg hunt and farm hours: 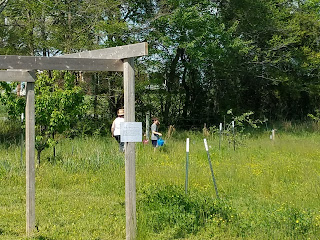 We hunted filled plastic eggs, but we were all most excited about the fresh eggs from the farm chickens. You had to be a bit more careful hunting, but it was so worth it come breakfast on Easter morning.

Saturday night, the kids left the Bunny a note at our house just in case he got confused: 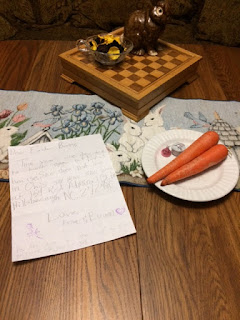 They were even so kind as to leave Nana's new address in case he was really lost. Thankfully, Buddy and Walter had already relayed the message--so they said when they arrived with bunnies: 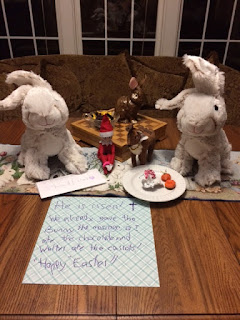 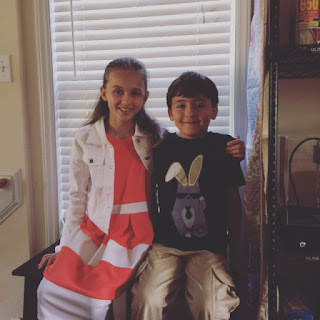 And Issa would like everyone to appreciate her new shoes: 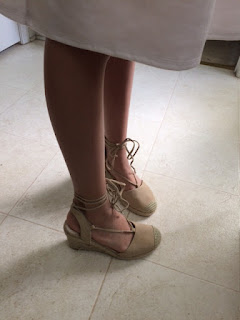 The Bunny had gotten the message, and the kids had great fun hunting at Nana's house with all new hiding spots: 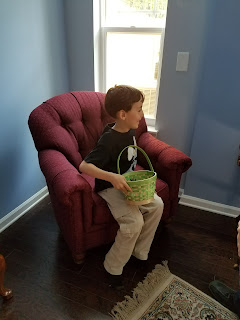 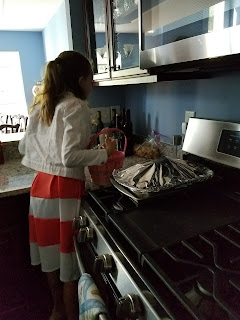 That Bunny took advantage of the whole house: 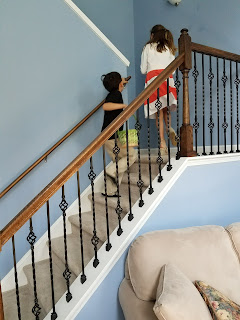 We had lunch there and then spent a pretty quiet afternoon just enjoying...and that's my favorite way to end any holiday.

Posted by Heather at 1:00 PM No comments:

Email ThisBlogThis!Share to TwitterShare to FacebookShare to Pinterest
Labels: Holidays 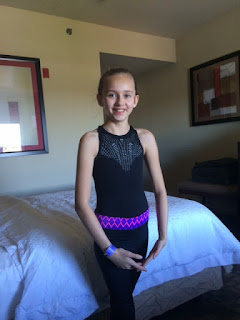 I love this little group of dance friends and their fabulous dance teachers: 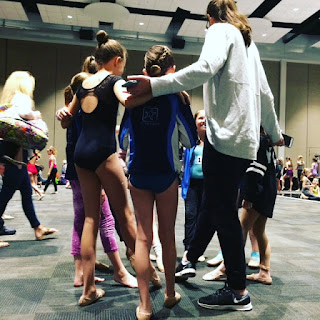 They are so supportive of each other. No matter what happened on the floor, as soon as they came off there were hugs and high fives. When one of them broke to the finals of scholarships, there was much rejoicing from all of them. I love that.

And I so want to hold tight to this weekend. I have never seen a more kind, thoughtful, gracious kid. Every time I turned around Issa was thanking me--for driving, for dinner, for watching. I got good hugs and sweet smiles. I sure do love dancing behind and beside this girl.
Posted by Heather at 8:21 PM No comments:

Email ThisBlogThis!Share to TwitterShare to FacebookShare to Pinterest
Labels: Issa

I truly don't know how I got so lucky as to find this man when I was 17: 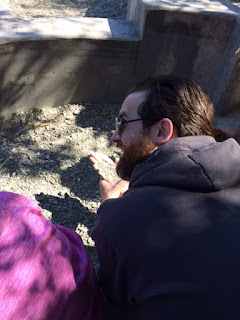 I took this picture at the aquarium last weekend. He was digging between our two kiddos, passing out shark teeth to strangers who weren't having much luck or adult support. He made so many littles smile. I will forever love how he just does those little things without a second thought.

And...he launched his own business this week. He's officially consulting, and I couldn't be more proud. The work he has done over the past several years has earned him quite the reputation, and I've been so proud to see so many people step forward and ask for his time.

I know these next few months are going to be quite the ride as Column Eight takes off, but I wouldn't want to be on any other ride with anyone else...
Posted by Heather at 3:08 PM No comments:

Email ThisBlogThis!Share to TwitterShare to FacebookShare to Pinterest
Labels: Husband

Spring Break is in the Books

We are starting the gentle transition back into the real world today. The kids are coming with me to work, and they head back to school tomorrow after a super fun week!

Tuesday, we spend the day shopping, but then Wednesday we had really big fun at the museum! The kids had the block room to themselves: 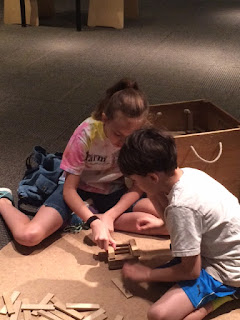 And it was a perfect day for climbing: 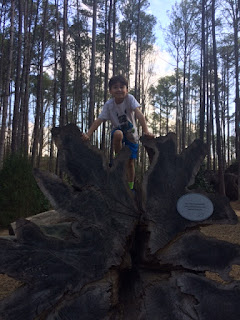 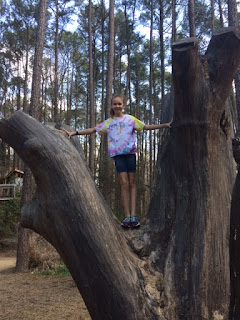 Thursday, we took Nana with us to the zoo. For the record: Nana was right. We needed sweatshirts, which I bought at the zoo. Evan pre-lunch: 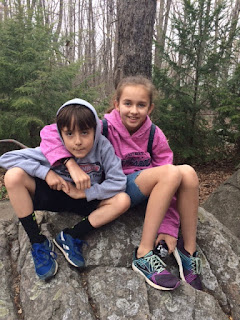 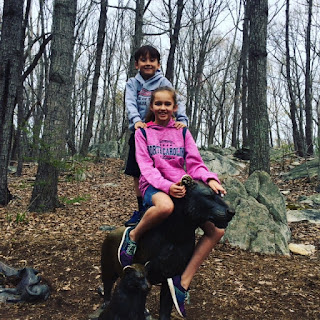 What a difference a sandwich makes. The chilly weather made the animals very happy, and we closed the place down!

Friday, we ventured to see the new Beauty and the Beast, which is awesome, and Saturday the kids and Daddy redid their maker space while I worked. To end the week with a bang, we spent yesterday at the beach: 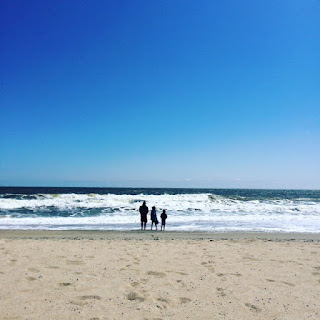 It was chilly, but we basically had the place to ourselves. We also visited the aquarium. We were able to see them feed the rays, and we learned a ton about sea turtles before visiting the frogs: 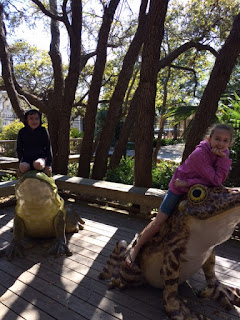 It was a fun week stay-cationing!
Posted by Heather at 11:25 AM No comments:

Heather
I am a crazy combinination of job titles at the moment: wife, mom, director, and professor. I love my family and our rather simple life...even on the days when life isn't so simple. I hope to capture a little piece of that wild and wonderful life we have here: the little moments that might otherwise be forgotten.