The Saga of the Balloon Hijinks 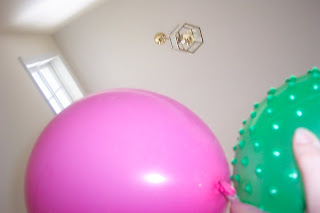 I spent way too much time trying to take this picture this morning, but I knew the balloon hijinks that happened at our house last night had to be captured on this blog. The balloon, the ball, and the window are all key players in this saga.

As anyone who is married to an engineer knows what is a foregone conclusion to most is simply a puzzle to be solved for an engineer. Having been married to an engineer for almost nine years, I have learned to just enjoy this ride and protect the breakables, which is exactly what I did last night. I suppose I should start at the beginning...

Issa had a fabulous day at school yesterday! When I picked her up, her teacher told me she had actually put an extra green stick in Issa's pocket, which she had never done for any other student, because Issa had been such a good listener and helper all day--even when the rest of her class was going insane and flipping their sticks to yellow and red at record rates. Daddy and I were so proud, and he offered to take her out to dinner as an extra treat. Of course, Issa asked to go to Red Robin. Critical to the story: we don't go to Red Robin for the food; we go for the balloons.

We had a great time at dinner, and when we got home Evan promptly released his balloon into our two story foyer. I announced it would just have to stay up there until it floated down on its own. Evan was shouting at the balloon to come down, and Issa was trying to explain that the balloon couldn't hear. Then, I saw the engineer's wheels starting to turn.

Before I knew what was happening, Daddy had grabbed the ball in the picture above and was mentally playing the angles. Soon, the balloon was being launched up to the front window to bounce back and push the balloon over the stairs so it could be retrieved. I moved to protect the breakables from the rebounding ball, and then found myself throwing the ball back to Daddy so he could repeat the process. A few short bounces later Daddy had retrieved the balloon and was the hero of the evening.

And that is the saga of the balloon hijinks...and a typical evening at our house.
Posted by Heather at 9:30 AM

Heather
I am a crazy combinination of job titles at the moment: wife, mom, director, and professor. I love my family and our rather simple life...even on the days when life isn't so simple. I hope to capture a little piece of that wild and wonderful life we have here: the little moments that might otherwise be forgotten.